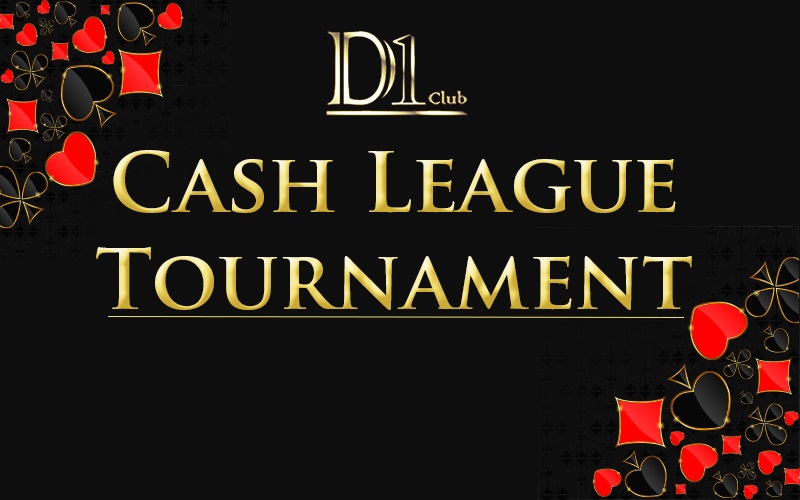 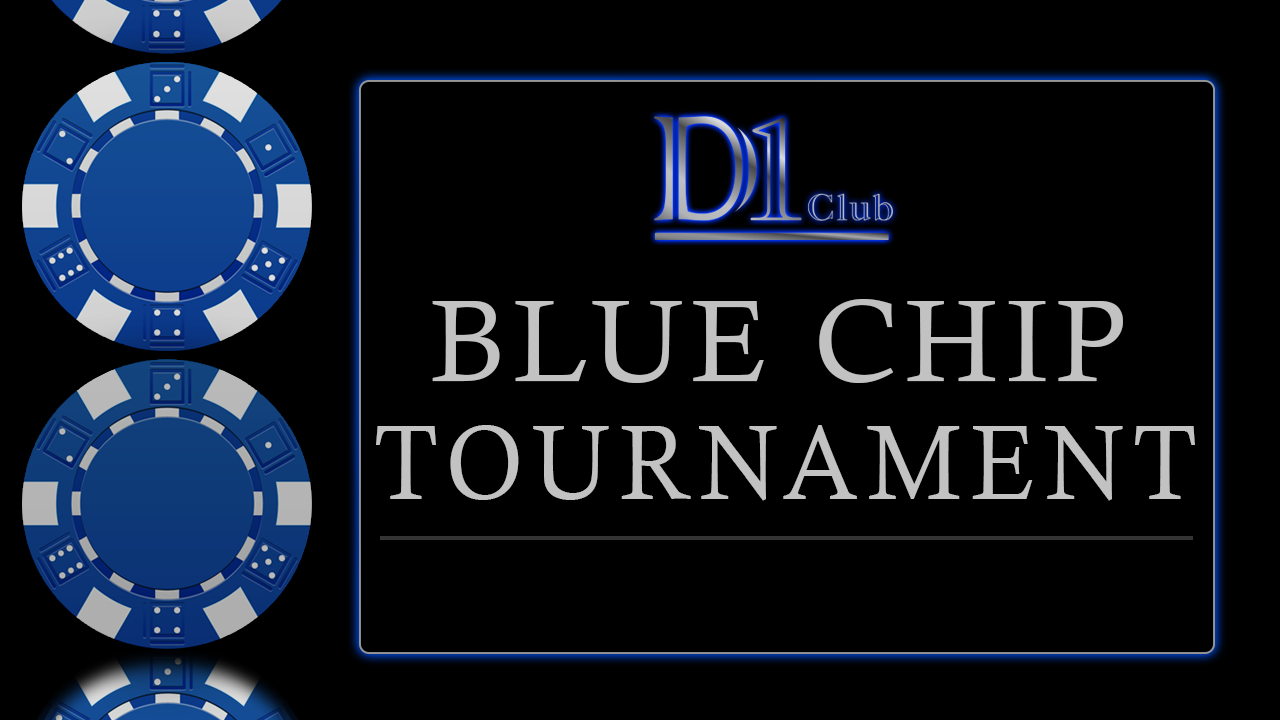 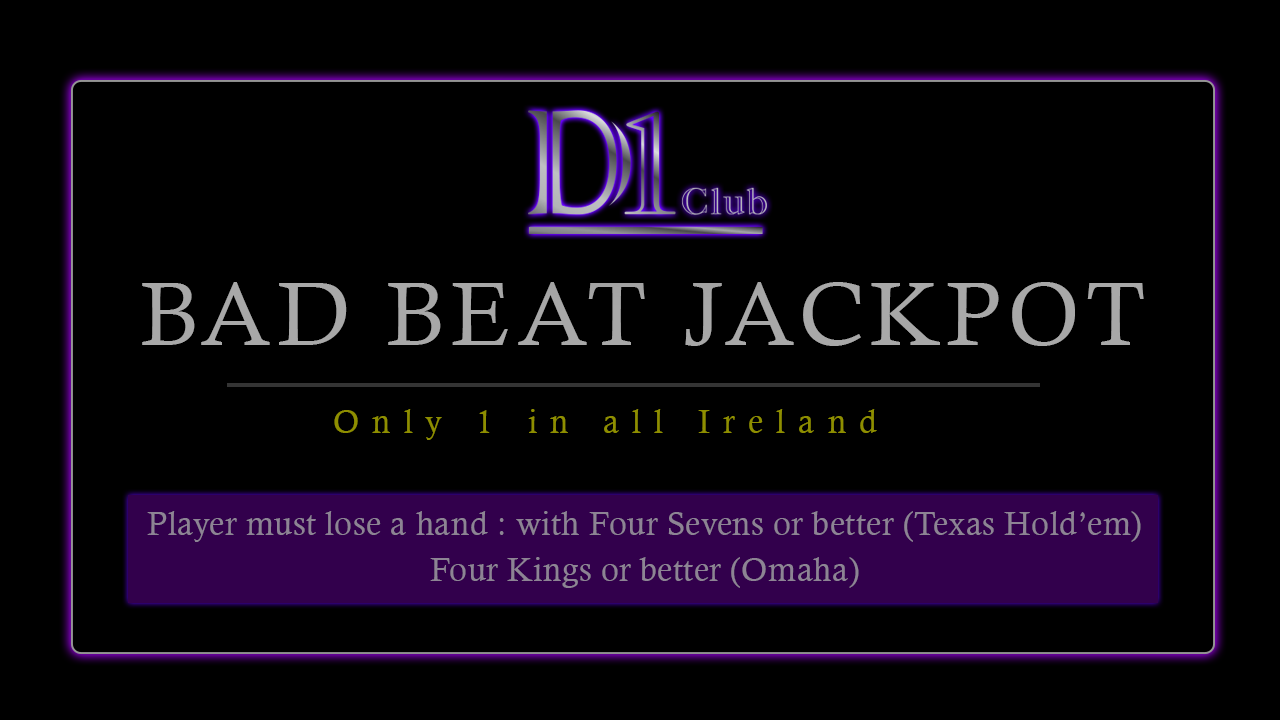 Only one in Ireland

Whether you’re new to the casino conventions or are a master hand at poker, there’ll be a live action game waiting for you in our D1 Club Dublin Casino. As well as playing No Limit Texas Hold’em, we also provide members with the Pot Limit Omaha experience. Our team of experienced dealers enable you to have a poker experience like none other in Dublin city. Our array of poker cash games makes our D1 Casino poker room come alive with excitement.

The thrill and rush of bluffs, buy-ins and chips will have your competitive side coming out in no time. Our private members casino ensures you play poker in the most exclusive of surroundings, any night of the week. Our staff will be happy to show you how to play and learn about Poker and your opponents.

RULES OF POKER AT D1 CASINO

In hold’em, Players receive two down cards as their personal hand (holecards), after which there is a round of betting.

Three board cards are turned simultaneously (called the flop) and another round of betting occurs.

The next two board cards are turned one at a time, with a round of betting after each card. The board cards are community cards, and a Player can use any five-card combination from among the board and personal cards.

A Player can even use all of the board cards and no personal cards to form a hand (“play the board”).

A Dealer button is used. The usual structure is to use two blinds, but it is possible to play the game with one blind, multiple blinds, an ante, or combination of blinds plus an ante.  Rounds of Betting
Opening Deal – Each Player is dealt two cards face down, which are known as hole cards or pocket cards.

First Round Of Betting – Starting with the Player to the left of the big blind, each Player can call the big blind, raise, or fold. The big blind has the option to raise an otherwise unraised pot.

Second Round Of Betting – Starting with the player to the left of the dealer button, each player can check or bet. Once a bet has been made, each Player can raise, call, or fold.

The Turn – The Dealer burns another card, and then adds a fourth card face-up to the community cards. This fourth card is known as the turn card, or fourth street.
Flop

Third Round of Betting – It follows the same format as the second round, but the size of the bets have usually doubled in limit games.

The River – The Dealer burns another card, and then adds a fifth and final card to the community cards. This fifth card is known as the river card, or fifth street.

Flop
The Turn
The River

Final Round Of Betting – It follows the same format as the second and third rounds.

The Showdown – Using the best five-card combination of their hole cards and the community cards, the remaining Players show their hands, with the bettor or last raiser showing first. The highest five-card hand wins the pot. (In case of a tie, the pot is evenly split among the winning hands.)
Other Texas Hold’em Poker Rules

These rules deal only with irregularities. See Button and Blind use for rules on that subject.

If the first or second hole card dealt is exposed, a misdeal results. The Dealer retrieves the card, reshuffles, and recuts the cards. If any other holecard is exposed due to a Dealer error, the deal continues. The exposed card can not be kept.

After completing the hand, the Dealer replaces the card with the top card on the deck, and the exposed card is then used for the burncard. If more than one hole card is exposed, this is a misdeal and there must be a redeal.

If the flop contains too many cards, it must be redealt. (This applies even if it is possible to know which card is the extra one.)

If the flop needs to be redealt because the cards were prematurely flopped before the betting was complete, or the flop contained too many cards, the board cards are mixed with the remainder of the deck. The burn card remains on the table. After shuffling, the Dealer cuts the deck and deals a new flop without burning a card.

If the Dealer turns the fourth card on the board before the betting round is complete, the card is taken out of play for that round, even if subsequent Players elect to fold. The betting is then completed.

The Dealer burns and turns what would have been the fifth card in the fourth card’s place. After this round of betting, the Dealer reshuffles the deck, including the card that was taken out of play, but not including the burn cards or discards.

The Dealer then cuts the deck and turns the final card without burning a card. If the fifth card is turned up prematurely, the deck is reshuffled and dealt in the same manner.

If you are playing the board, you must so declare before you throw your cards away; otherwise you relinquish all claim to the pot.

Omaha is similar to hold’em in using a three-card flop on the board, a fourth board card, and then a fifth board card. Each Player is dealt four hole cards (instead of two) at the start.

To make a hand, a Player must use precisely two hole cards with three board cards.

The betting is the same as in hold’em.

First betting round.
The Dealer burns a card, then turns over three community cards face up (the flop)
Flop

Second betting round.
The Dealer burns another card, then turns over one more community card (the turn, fourth street)
Flop
The Turn

Third betting round.
The Dealer burns another card, then turns over one final community card (the river, fifth street)

Flop
The Turn
The River

All remaining Players must use their two pocket cards and the three board cards.

All the rules of hold’em apply to Omaha except the rule on playing the board, which is not possible in Omaha (because you must use two cards from your hand and three cards from the board).

A qualifier of 8-or-better for low applies to all high-low split games, unless a specific posting to the contrary is displayed. If there is no qualifying hand for low, the best high hand wins the whole pot.

EXPLORE OUR OTHER GAMES